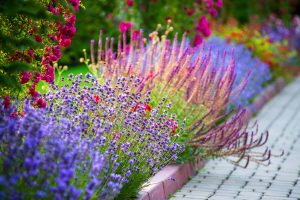 Congenital Conditions To The Healthy Growth of Plants : it certainly is true that many modern houses of the better sort do not offer very congenial conditions to the healthy growth of plants. It is equally certain that in many cases these conditions may be changed by different management in such a way that they would be not only more healthy for plants to live in, but so also for their human occupants. In many other cases, there is nothing but a lack of information or energy in the way of constructing a place entirely suitable for the growth of plants.

To illustrate what I mean,

I mention the following instance of how one person made a suitable place in which to grow flowers. Two narrow storm windows, which had been discarded, were fastened at right angles to the sides of the dining-room windows, and the regular storm sash screwed on to these. Here were the three glass sides of a small conservatory. Half-inch boards made a bottom and roof, the former being supported by brackets to give strength, and the latter put on with two slanting side pieces nailed to the top of the upright narrow sash spoken of, to give the roof a pitch. The top and bottom were covered with old flexible rubber matting which was carried back under the clapboards making a weather-proof, tight joint with the side of the house.

Six-inch light wooden shelves on the inside gave a conservatory of considerable capacity.

How many houses there are where some such arrangement could be made as the result of a few hours’ work and thought, and a very small expense. And yet how infrequently one sees anything of the kind. In many instances such a glassed-in window would be all that is needed, sufficient heat being furnished by a radiator under the window within the house. In the case mentioned, however, it was necessary to heat the small greenhouse. This was done by installing a small gas stove in the cellar, as nearly as possible under the window greenhouse. Over this stove, a large tin hood was fitted, with a sliding door in the front to facilitate lighting and regulating the stove. From the hood a six-inch pipe, enclosed in a wood casing for insulation, ran through the cellar window and up into the floor of the conservatory, ending in a small radiator.

(although in many instances they might), but to show what a little ingenuity and effort will accomplish in the way of overcoming difficulties.

Nor is the reward for such efforts as these restricted to the growing of a few more plants. From the actual accomplishments described in the second part of this book, the reader must see that it is entirely possible and feasible for one with only average advantages to have during a large part or even all of the year not only flowers which cannot be grown to advantage in the house, but also such vegetables as lettuce, radishes, tomatoes and cucumbers, and others if desired; and also to give the flower and vegetable gardens such a start as would never be possible otherwise. Do not attempt too much, but do not be content with too little, when only a slight increase in planning and work will bring such a tremendous increase in results and happiness. I feel confident that there is not one home out of ten where more thought and more information brought to bear on the things whereof this book treats, would not yield a greater return in actual pleasure than any other equal investment which could be made.

Do not be impatient to get to a description of all the results at once.

Do not skip over the chapters on dirt and manures and pots and other seemingly uninteresting things, because in a thorough understanding of these essentials lies the foundation of success. And if a condition of soil, or an operation in handling plants does not seem clear to you as you read it over, remember that in all probability it will become so when you actually attempt the work described. Nothing worthwhile is ever won without a little–and often a great deal–of patient work. And what is more worthwhile than to keep busy in the constant improvement and beautifying of one’s daily surroundings?

This post “Congenital Conditions To The Healthy Growth of Plants part 1” was kindly provided by Landscaping Cleveland ( type landscapers near me in Cleveland).